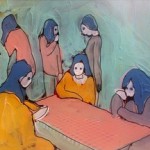 Prostitution is often portrayed as a completely normal thing, something that has always existed. This usually involves very little thought of the women in prostitution. If it does, the argument of ‘choice’ is very quickly brought up. Who wants to take on the role of a person who sanctions or judges?

But how does a woman end up in so-called ‘voluntary’ prostitution anyway, and what does it mean for her (and for her children)? Prostitution has become a perfectly normal source of income: the question whether it is a job like any other has been seriously discussed by politicians and unionists in the past years.

In my many years of experience as a psychotherapist, I have supported many prostitutes and become familiar with the backgrounds that led them into prostitution. It became clear in all cases that prostitution was a continuation of experiences of violence in their lives. Either the women themselves were exposed to sexualized violence or they grew up in an environment in which women are systematically degraded. I want to illustrate this using three typical case examples:

A patient of mine, who also referred to herself as a ‘voluntary’ prostitute, grew up with an image of women that was entirely shaped by violence. Her mother was beaten by her father and subsequently raped again and again. Sexuality was tied to violence in her self-image. These scenes repeated themselves over and over. The mother took her desperation out on her daughter by calling her “whore” when she began developing an interest in boys. When she later prostituted herself, she told her mother: “See? I became exactly what you wanted me to become.”

Another prostitute told me that she didn’t feel uncomfortable when she entered a brothel at the age of 19. On the contrary, she said, at least now she was getting paid for “it.” Her life story, too, was shaped by sexual violence in her childhood.

For another client of mine, entry into prostitution had coincided with a combination of other, pre-existing disorders: anorexia and anxiety. She managed to exit prostitution after one year and declared 20 years later that prostitution had been a part of her self-destructive behavior.

To continue to speak of prostitution as ‘normal’ with this knowledge means to acknowledge violence against women as an entirely normal and legitimate thing. These women did not choose prostitution as a ‘job like any other’. They are often women who were put through very painful experiences in their past.

Studies in trauma treatment have found that the traumatized person may feel a compulsion to control the traumatizing events to which they were helplessly exposed. A form of control is repetition: so-called trauma re-enactment. In prostitution, the trauma is placed into a framework in which the prostitute gains a feeling of control over the events.

Women who have experienced physical and sexual violence and/or were raised in an environment in which women are socially degraded often develop feelings of guilt. Unlike men, women are hardly able to repress feelings of guilt, which turn into feelings of self-hate. Women mostly direct the aggression this results in against themselves. In light of this, prostitution appears as an act of self-hate and self-harm. Depth psychologists speak of masochistic reversal: “Now I am exactly what you wanted me to be.” Trauma therapists speak of perpetrator introjects. There are two types of introject, aspects of perpetrator identification and perpetrator loyalty.

Perpetrator identification is often a male introject (80 to 90 percent of physical and sexualized violence is perpetrated by men). Perpetrator loyal introjects, often termed female introjects, are incorporated into the victim’s personality if they were exposed to the (adult) perpetrator for long enough. These are thoughts that the perpetrator has about us, sentences he says about us or orders that he gives us. In one form or another, everyone has something like this. In a situation in which we are entirely at the perpetrator’s mercy, we ‘merge’ with him. We adopt the opinion he has of us and begin to think about ourselves the way he does. These are dysfunctional attempts at self-protection: “If I torture myself and beat myself up, then the ‘bad people’ won’t have to do it so much.” Or, “If I do exactly as they say, maybe they will leave me be.” The identification with the perpetrator’s gaze that this causes has a life of its own, changes are perceived as threatening, everything has to stay the way the ‘tormentor’ would have it. A typical example is psychological dependence on a pimp.

Working with perpetrator introjects is an everyday thing in my profession. The history of how my clients came to believe these negative things about themselves is usually not something they themselves are aware of. In addition to a superficially unremarkable and well-adjusted “everyday self”, they may be haunted by unconscious perpetrator-loyal aspects.

Many of my clients suffer from low self-esteem and are very hard on themselves, frequently saying things such as, “I am not enough,” “I can’t do it” or “I am unlovable.” This can go as far as self-hate, hate of their own bodies, of their own vitality – and their own sexuality. Behind the self-assured façade of some prostitutes there are certainly a lot of negative things that are continuing to have an effect internally. One patient phrased it as follows: “I’m not worth anything else, after all.”

In light of this, the concept of ‘choice’ in prostitution and its portrayal as a ‘normal job’ must be questioned. Johns must be educated and made to take responsibility. A society that continues to degrade women to non-human objects, in which sexual exploitation takes place, which stages domination of women in eroticized form, is deeply misogynistic. It perpetuates male supremacy and contains perpetrator structures.

This article was published in the last issue of Emma 2013.