Prostitution is a controversial issue around the world, including Canada. This panel will discuss the impact of the different approaches to prostitution adopted by Sweden and Germany. Speakers will also examine Canada´s new prostitution law with a focus on Vancouver. 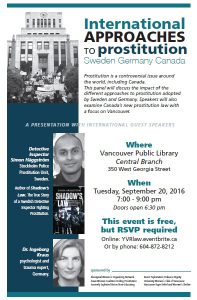 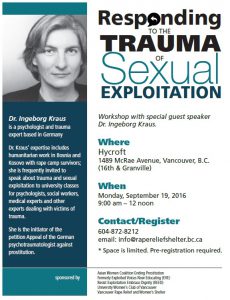 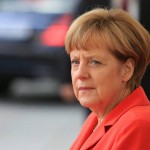 To the Right Honourable Dr. Angela Merkel, Chancellor of Germany

2015 marks the 20th anniversary of the Fourth World Conference on Women in Beijing in September 1995.

In connection with the United Nations Commission on the Status on Women and the commemoration of the Beijing Platform for Action, hundreds of organisations working for the promotion and protection of equality for women are in New York to assess and discuss the progress made for women and girls’ rights in the past 20 years.

Among the challenges to equality for women are many forms of discrimination against women, their poverty and their sexual exploitation which underpins their lack of status and opportunities worldwide.

END_OF_DOCUMENT_TOKEN_TO_BE_REPLACED

The fifty-ninth session of the Commission on the Status of Women will take place at United Nations Headquarters in New York from 9 to 20 March 2015. Representatives of Member States , UN entities, and ECOSOS-accredited non-governmental organizations (NGO) from all regions of the world attend the session.

Stop Sexbuying: From 5th until 7th of December 2014 in munich

Women in prostitution experience the use of their bodies by unknown men between once and 20 to 30 times a day. Together with Sweden we view this reality as violence against women. An event offering information and raising awareness as regards the concrete situation of these women and the physical, psychological and mental consequences for them is absolutely necessary. Women who have succeeded in exiting prostitution are increasingly voicing their experiences. They report having to dissociate their feelings and reactions, having to function like a machine in order to go through the degradation and pains that they are subjected to by constant vaginal, anal and oral penetration. They report having learned this technique of dissociation through childhood violence. They hoped to finally gain control of the situation and thus power by repeating the trauma as an independent decision. The opposite then happens: the trauma is perpetuated by recurrent repetition.

The congress informs on the realities of prostitution, the high risks born by the women, the intense violence perpetrated by the punters. It counters the prostitution myths by reality and clarifies that the purchase of sex must not be legal.

Following Panels on Saturday 6th address the Problem of Trauma and Prostitution:

The Reality of Prostitution: Survivors tell the truth:

Trauma. Traumatisation as cause and consequences of prostitution

You can read the whole program here:  conception for a congress against prostitution.2.